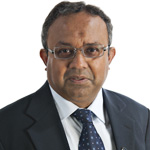 Dipak K. Dey, is a Board of Trustees Distinguished Professor of Statistics at the University of Connecticut. He received his Ph.D. in Statistics from Purdue University in 1980. He is an elected fellow of the American Association for the Advancement of Science, American Statistical Association, Institute of Mathematical Statistics, International Society of Bayesian Analysis, Connecticut Academy of Arts and Sciences and an elected member of the International Statistical Institute. Some of the awards and honors Dey has received include the Outstanding Alumni award from the Department of Statistics, Purdue University, first Marth award for mentorship from the University of Connecticut, the Research Excellence Award from the University of Connecticut Alumni Association, and the Research Excellence Award from the American Association of the University Professor, University of Connecticut. He was Head of the Department of Statistics for 3 terms and was Associate Dean, College of Liberal Arts and Sciences for one term. He has published ten books/edited volumes and over 260 refereed journal articles and book chapters in various statistical and interdisciplinary journals. His research area includes, statistical methodology and applications involving categorical and longitudinal data, classification and clustering, spatio-temporal and survival data analysis. Areas of his research applications include Biometry, Bioinformatics, Data mining, Environmetrics, Econometrics, Image processing, Morphometry and Population Genetics. He has supervised 38 Ph.D. students and has presented more than 200 talks at Professional meetings and various departments. He has been a visiting professor at Macquire University, Sydney, Australia, Pontificia Universidad de Catolica, Santiago, Chile, University of Sao Paulo, Sao Paulo, Brazil, University of British Columbia, Vancouver, Canada, Indian Statistical Institute, Calcutta and Delhi, India, the National Institutes of Standards and Technology, Gaithersburg, MD, Statistical and Applied Mathematical Sciences Institute, Research Triangle Park, NC. and Social Science Data Analytic Center, Virginia Tech, Arlington, VA.